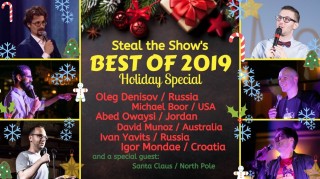 The end of the year is near, holiday season is upon us, and that can mean only one thing: it's time for Steal the Show's Best of 2019 compilation show!

To celebrate the holidays as well as the end of the first year of our existence, we are putting on a special stand-up show featuring the best talent you've had a chance of seeing at our shows; six wonderful comedians from five different countries around the world, featuring their most hilarious, hardest hitting jokes they've performed in 2019!

As awesome as it already sounds, THAT'S. NOT. ALL. Seeing it's the holiday season, we've arranged a special visit from non other than Santa Claus himself, who's dropping by Moscow for one night only, and bringing presents to our most enthusiastic audience members.

On Saturday, 21st of December, come and see:

Michael Boor (USA) - former St. Pete comedy resident, moved to Moscow and kept pursuing his stand-up journey opening for Helgi Steinar (Iceland) in June, and even did shows in his hometown of New York, USA

David Munoz (Australia) - veteran of Moscow comedy scene, this year became an actual pioneer, doing a first solo show in English in Siberia in front of a sold out room in Irkutsk, and took part in StandUp Fest19 in Saint Petersburg in June

Abed Owaysi (Jordan) - a well known face in English comedy in Moscow for years now, performing both stand-up and improv, this year decided to challenge himself further and expand his stand-up into Russian language shows, and with quite a success at that

Igor Mondae (Croatia) - co-founder of Steal the Show, besides regularly organizing, promoting, and hosting shows in Moscow, this year debuted his first hour of comedy in front of a sold out room in Moscow and StandUp Fest 19, and performed in Croatia and Hungary

Host: Oleg Denisov (Russia) - frequent traveler, Oleg managed to partake in NINE international comedy festivals all over UK and Scandinavia this year, including his 3rd full run at Edinburgh Fringe festival, making him the most billed Russian comedian abroad to date, in addition to regular appearances in Moscow and co-founding Steal the Show